Post a photo to get comments and suggestions on how it can be improved. For best help you should include the relevant EXIF information. (Use "Photo Sharing" if you simply want to share images and are not after feedback.)
Post Reply
5 posts • Page 1 of 1

I took this during the club's recent tri[p to Norfolk. While everyone else headed off to Happisburgh and Horsey, instead I went to Upton.

I saw this technique for splitting an image at the TVDIG event to which I went yesterday and thought that it could be appropriate for this scene. While I have my own views, it would really help me if others let me know what they think as it is the first time I have tried this technique. It started out as a single image, which I converted to monochrome using Silver Efex Pro before dividing it.

I can see the potential of this approach, as it directs the eye to explore the two different parts of the image (rather than wander naturally over it) and invites the viewer make the connection between them. This provides a degree of creative control, although if used incorrectly it could direct the viewer to the wrong place or interrupt the harmony of the image. I suppose it will work for certain types of images better than others. It's perhaps a technique I would use to put something on my wall rather than for a competition (although I know your view on competitions, which probably proves your point!). I expect you already know this, but for the benefit of others the multi-lens filter in Nik's Analog Efex 2 will do this for you at the touch of a button, although as far as I can tell it allows splits in 3 or 4 segments only albeit with a choice of colour borders. I've only ever played around with it briefly, but thought it worked quite well with nature images, e.g. woodland, where putting segments in an unnatural order (i.e. not as the image was taken in camera) was quite pleasing. The whole Nik software package, courtesy of Google, is now free to download.

I've mocked up an example here quickly from a bluebell image taken at Banstead Wood a couple of weekends ago, which I (over)processed in Nik's Colour Efex.
https://www.flickr.com/photos/126958142@N07/34284129856/in/dateposted/

Following on from my last post, just discovered how to display images on Flickr via the forum!

addressbook (1 of 1).jpg by steve brooker, on Flickr
Top

Thanks for your thoughtful response about the use of this technique. I suspect you are correct about the limtations of its use for competition images. Some judges are fond of saying that they can see two images in a shot, so this type of presentation gives them the perfect excuse. On that basis, a lot of Lee Friedlander's work would not fare well. He is fond of finding something in the scene to divide the image, example below. 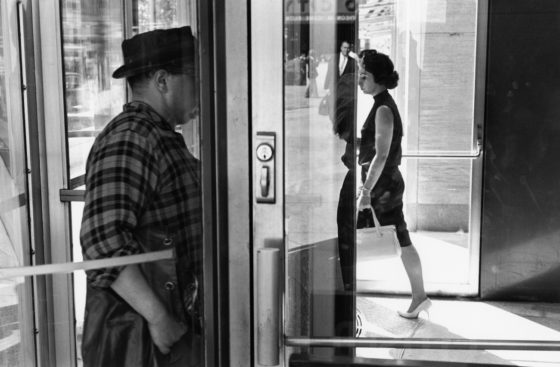 I had not previously been aware of the split image facility in Analog Efex and divided the frame using Photoshop. With just a simple split, that was straightforward, but I can see that it might be more difficult when there are more divisions.

Why did I think that splitting the shot was appropriate in this instance? As I see it, it highlights that there are both symmetrical and assymetrical elements in the scene, which would be less obvious in a more conventional shot. The windmills in each corner are symmetrical insofar as they mirror each other, although their positioning is assymetrical. There is also some symmetry/assymetry in their tones. The left hand image has a lighter sky and darker ground, which is reversed on the right hand side. Once again there is symmetry, but positioning is assymetrical. The curve of the reeds on the right helps hold the eye in the image. To my mind it works, although I am still not sure if others agree.
Regards

Thank you for posting your image for critique/feedback.

I've spent some time considering your images which although a fine image, for me the way that it has been presented (e.g. split image) does not cause me to delve in to the image in any particular way. In fact, despite the quite wide borders, the images to me becomes one image and does not cause me to explore it in any great depth.

All that said, I agree with Steve. His example of a dividing his image into three does cause the eye to roam around the image and to in some way stich it together in the mind. That for me is a far more enjoyable experience.

I'd be interested to see your images divided into three components in order to give a more reflective review.

Users browsing this forum: No registered users and 1 guest